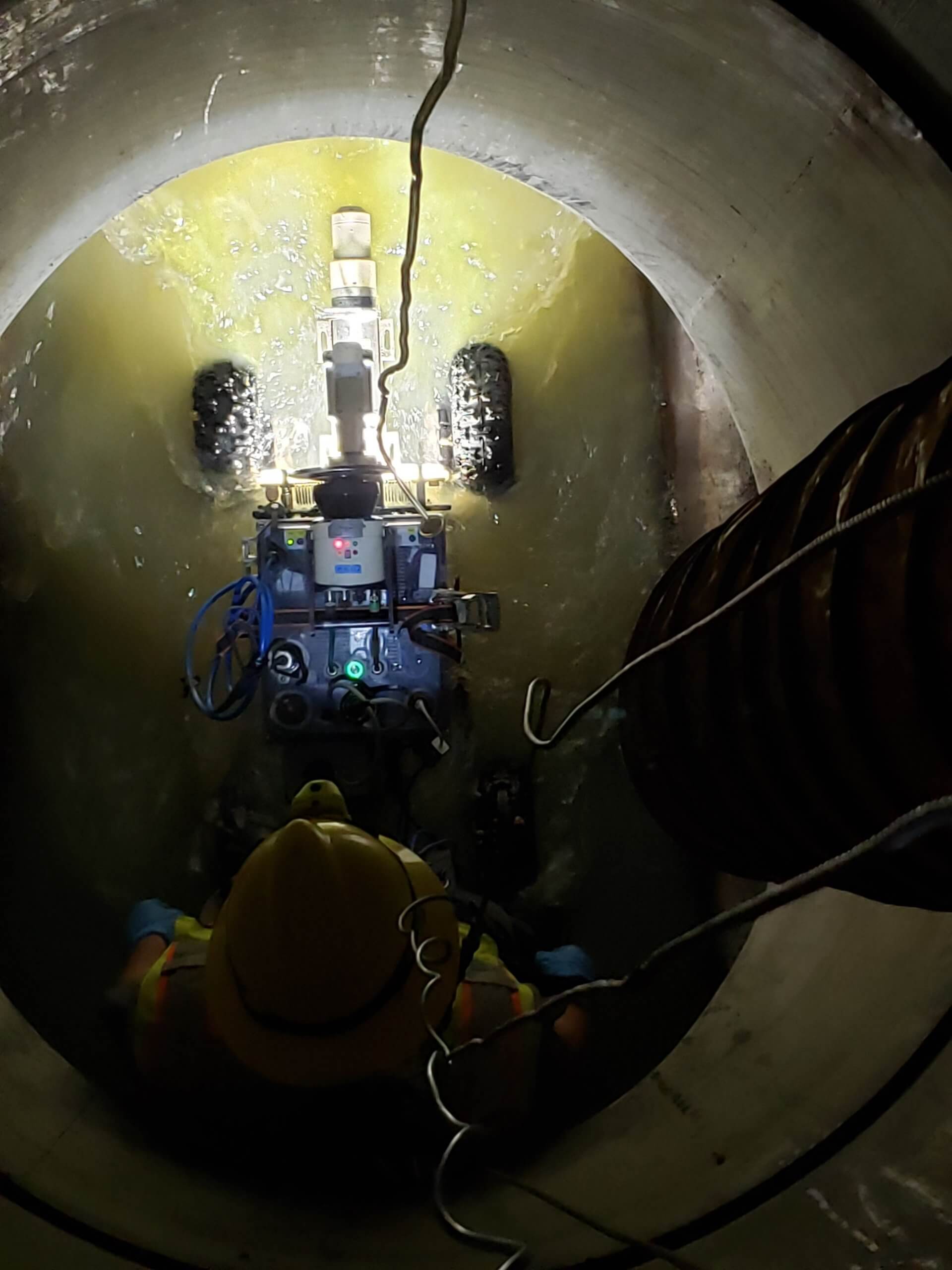 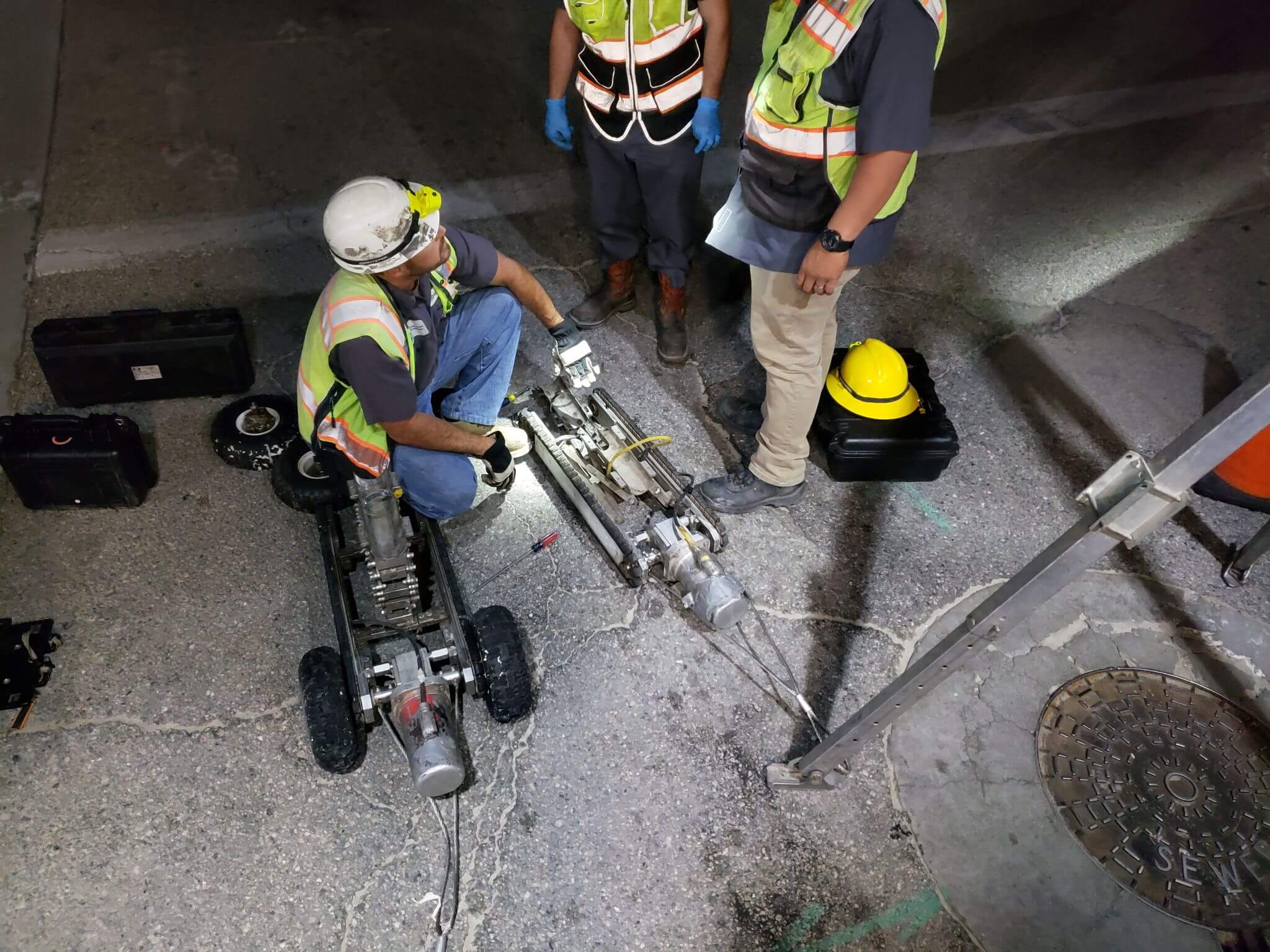 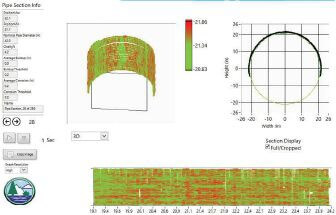 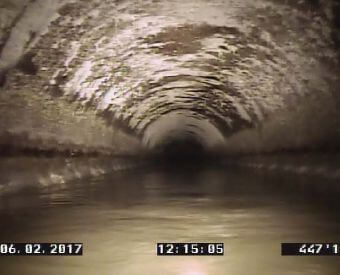 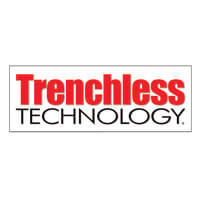 Any sewer rehabilitation project must first begin with a detailed inspection to assess the condition of the asset. That data is then analyzed to estimate the remaining useful life of the asset, plan when rehabilitation should occur, and determine which rehabilitation method is best suited for the repair.

Inspections are typically performed with robotic Closed-Circuit Television (CCTV) inspection using the NASSCO Pipeline Assessment Certification Program (PACP) coding to identify and rank the defects by type and severity. Man-entry inspections can also be performed but can be dangerous in large sewers with high flows, and usually provide limited information due to the type and methods of testing that can be performed manually.

Multi-Sensor Inspection (MSI) robotic tools gather a comprehensive and advanced data set throughout the entire length of each inspection. Most MSI robots include a CCTV camera and 3D LiDar (Laser) for inspection above the water line, and an acoustical Sonar unit for inspecting below the water line. The CCTV operator performs a typical PACP inspection, while at the same time, the 3D laser is scanning the entire interior surface to create a 3D model of the pipe, recording precise locations of corrosion and buildup and quantifying those amounts. Underneath the water line, the profiling sonar is collecting three to four profile scans per foot to determine the amount of debris in the pipe, and can also help identify any large defects that may be hidden under the waterline.

The Mission Trunk Sewer Project
The Sacramento Area Sewer District (SASD) provides sewer collection services to 1.2 million people throughout the Sacramento region in California. The Mission Trunk Sewer is a 34,000 lf stretch of unlined reinforced concrete pipe (RCP) ranging in diameter from 36 to 75 in. Due to the criticality of this large transmission sewer, SASD regularly performs scheduled inspections to monitor its condition and performance.

MSI Inspections
In 2017, SASD contracted with National Plant Services Inc., (NPS) to perform comprehensive MSI investigations of the Mission Trunk, which included CCTV inspection, 3D laser scanning, and sonar profiling. NPS processed and analyzed all data and delivered reports for every sewer segment in the scope of work indicating 3D corrosion and buildup profiles and measurements for every foot of pipe, as well as the debris quantities as calculated from the sonar scans.

SASD Analysis
SASD staff reviewed all MSI results and developed a unique grading system for each pipe segment. The grading system considered CCTV inspection information along with laser and sonar profiling data. Using this grading system, SASD was able to evaluate and score each pipe segment and define the extent of the rehabilitation project. Additionally, after reviewing the sonar results, SASD determined the quantity of the debris that would have to be removed by the contractor who would ultimately complete the rehabilitation project. This estimated debris quantity was included in the contract bid documents so that bid pricing would be more accurate and equitable across bidders as everyone would be able to bid on the same assumed quantity of debris removal.

Design
Once SASD assigned a grade to each pipe segment that was inspected, HydroScience Engineers was contracted to review the assessment grades, refine the data, and rank the rehabilitation of each pipe segment based on priority. Prior to the rehabilitation alternative analysis, HydroScience worked with SASD’s modeling group to evaluate the Mission Trunk’s performance during both peak dry-weather flows as well as buildout peak wet-weather flows.

Various rehabilitation methods were evaluated and ranked based on constructability, system reliability, hydraulic performance, public impacts, and other factors. In the end, CIPP received the highest overall score. HydroScience worked collaboratively with SASD to develop design documents for the Mission Trunk Sewer Rehabilitation Project, which will improve nearly three miles of deteriorated pipe. In April 2020, SAK Construction began construction of these improvements that will ensure the community continued reliable service from the Mission Trunk system.

Michelle Beason, P.E., is regional manager at National Plant Services Inc., a Carylon Corp. and is a board member of Nassco and chair of the Nassco infrastructure assessment committee. Agustin Lopez, P.E., is associate engineer at Sacramento Area Sewer District contributed to this article.

Back to News & Events